N.B. The mozrepl technology used by WWW::Mechanize::Firefox is end of life, due to it’s dependencies being retired from Firefox in November 2017. Thanks to Christopher Nielsen for letting us know.

I’ve been playing with WWW::Mechanize::Firefox. It’s like the LWP-backended WWW::Mechanize, but with a browser doing all the work. Instead of doing it all in Perl, I can use it as the glue language that it is.

Sometimes WWW::Mechanize, LWP::UserAgent, or Mojo::UserAgent aren’t enough. For basic web scraping and automation they work well, but fail miserably for anything that requires JavaScript. Some people have luck with SpiderMonkey (with several Perl interfaces), but that still isn’t the whole browser environment.

Before you start, you need the Firefox browser (or one of its forks) with the MozRepl add-on, which provides an interactive JavaScript console that you can telnet into. Once activated, you can connect to the console and can control the browser. 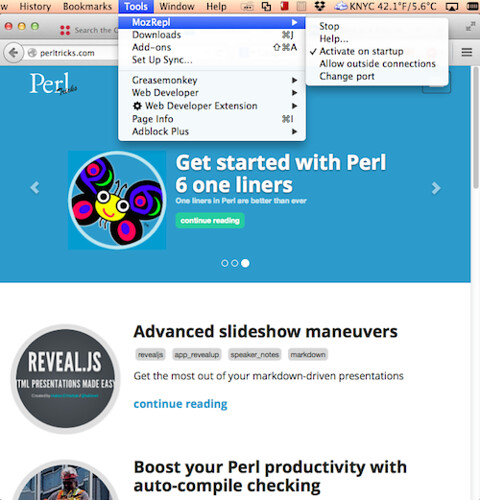 I have to know JavaScript to control Firefox directly. I can telnet into the MozRepl server and issue commands. It’s a bit more work than I’d like to do. 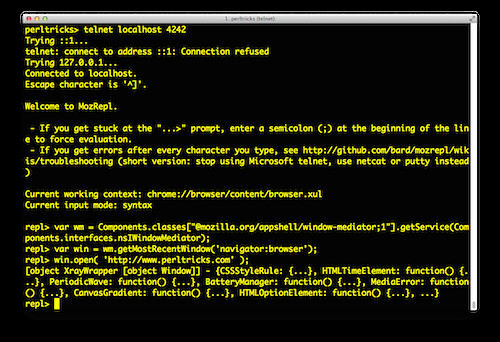 I’m not going to control Firefox directly, though, because I’m going to let some Perl modules do that for me. The basic interface of WWW::Mechanize::Firefox is the same as WWW::Mechanize:

I get a list of the links on the PerlTricks main page:

That’s not even the good part yet.

Since I’m connected to a JavaScript terminal, I can evaluate JavaScript code. The eval returns the result and its type:

That evaluates the JavaScript in its own context, which isn’t that interesting for me. I want to interact and control parts of a web page. To do that, I use the eval_in_page. That runs the JavaScript with everything else going on in the current tab, including all the JavaScript code it has loaded. Here’s an example that uses the StackExchange JavaScript to change the view from the desktop mode to the mobile mode:

When I run this, the screen changes from the full site to the mobile site.

This approach has some problem though, almost none of which come from Perl. If I want to automate something that makes many requests or runs for a long time, Firefox is likely to have problems. Over time, it’s memory footprint grows, leading to poor performance and crashes. Sometimes the connection to the console breaks, taking down my program with it.

Because of this, I limit my use of WWW::Mechanize::Firefox to the parts of my problem that require JavaScript. I can extract the information I need then use Mojo::UserAgent to handle the other parts.

The WWW::Mechanize::Firefox isn’t the only way to do this sort of thing. Rob Hammond posted on blogs.perl.org about PhantomJS, which received some comments about WWW::WebKit. There used to be a Win32::IE::Mechanize, but apparently it doesn’t work in IE 8. Selenium and Test::WWW::Selenium is another tool that I could use, but that’s more geared to browser acceptance testing and replays.

Join the discussion on the Perl subreddit about this article!